In this blog just some facts to tell that it is real. You know, …, somehow it looks so incredible all this to me that maybe finally I can feel some joy in it. Like finally getting over the final test and pass it.

But to write as guide of crossing I have to go with facts.

Lets go from the start. I have bean reaching Azores from east  and I was approaching the Flores island from the south where port of entrance Porto de Lales is. 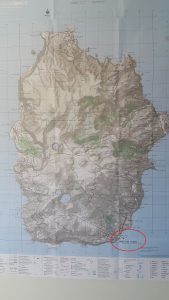 As first I was calling on radio on canal 16. And no one was answering because it was  probably to early in 8 in the morning. So I anchored where red point on picture below is front of Port of Lajes 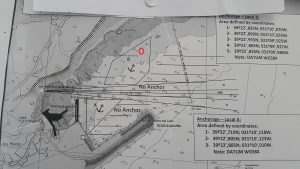 And I went into marina by dinghy. On the way to marina I was stopping to one boat where I saw some  life before looking for the anchoring spot. And they were saying just go in the marina and on the other side you will find the office. So  it was really easy ; just little upper from the marina on the left side there were a building with office. (And by the way little upper from the office in the next building there is a laundry shop. 4 euro for washing and 2 for drying.) And in five minutes was over. On the end he was asking:” Do you have any question?” and I was answering: “Yes have can I get into marina.”  I forgot to ask about the price , but for Tereza should not overpass 15 Euro.

To get into the marina in Port of Porto de Lajes is easy but you have to be careful because there is no much space fro maneuver . 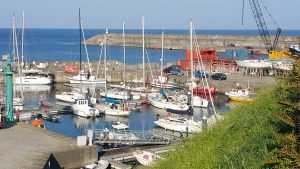